Under the pretext of celebrating the centenary of Professor Dr Laura Ayres, the Loulé City Council, through the Loulé Municipal Museum, requested the creation of a tribute exhibition to this personality of great national importance.

For the development of the concept for this exhibition, it was articulated with the mentioned museum, as well as with the co-author Cristina Fé Santos, who together with Rui Lourenço, created the texts about Dr Laura Ayres and also provided images of the honoree.

This project was developed by the designers Luís Baptista and Marlon Duarte, who, based on the briefing made with Cristina Fé Santos and Ana Sousa (CML – Museum), and on the research carried out on the honoree, created an aesthetic environment suited to her personality.

Professor Dr Laura Ayres, in addition to being a great doctor, researcher, teacher, scientist and politician, with enormous national and international relevance, “was a woman of affection and action”. Considered a fighter, optimistic and nonconformist by nature, she was also charismatic, creating relationships quite easily and being creative and inquisitive. These and other characteristics “made her a pioneer in the field of public health and virology, but also as a woman of her time”.

Still, her immediate interest in research, as well as when the first cases of those infected with the AIDS virus were diagnosed, she gave herself with “heart and soul” to all who sought her out, without fear of contagion and without prejudice, made of Professor Dr Laura Ayres an extremely relevant personality in the fight against this disease.

These factors made that during the project we chose the colour pink to represent the graphic pieces that were based on an exhibition of 12 panels measuring 75x180cm, in the creation of a printed postcard distributed by CTT, as well as other publicity and communication, such as poster and program.

The rare images of the honoree, as well as their poor quality, typical of the time, made us take extra care in the treatment of images given the size of the pieces in the exhibition. The combination of elements of the layout of the pieces that make up the exhibition intended to imprint the dynamism of her personality, highlighting her image, combining harmoniously with the texts by Cristina Fé Santos and Rui Lourenço.

For the layout of the postcard, 2 images of different moments in the personality's life were chosen, always with the pink tone, evident in all the pieces of the project.

Also, in order to contextualize the project as part of her centenary celebrations, a “seal” representing the 100 of her birth was created. This seal was placed on all project layouts.

Finally, Flow Productions had a partnership with KoisasKomideias, which printed and assembled the necessary structures for the exhibition. This exhibition was mounted on custom-designed support, on an iron structure, with connectors that connect the pieces of the structure. The 75x180cm panels were printed on vinyl, laminated and applied on Dibond plates, with magnetic tapes that allow for greater ease of assembly and disassembly of the travelling exhibition.

The customer and visitors very well received the exhibition, and Flow Productions received very positive feedback from this project. 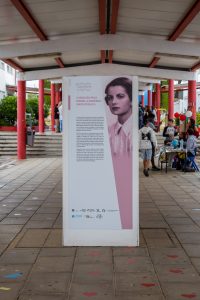 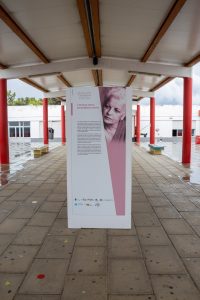 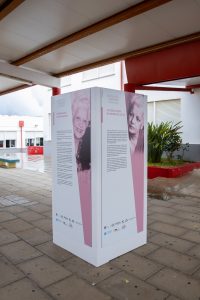 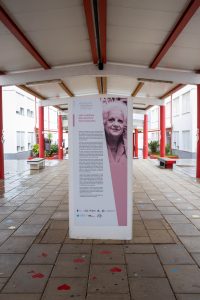